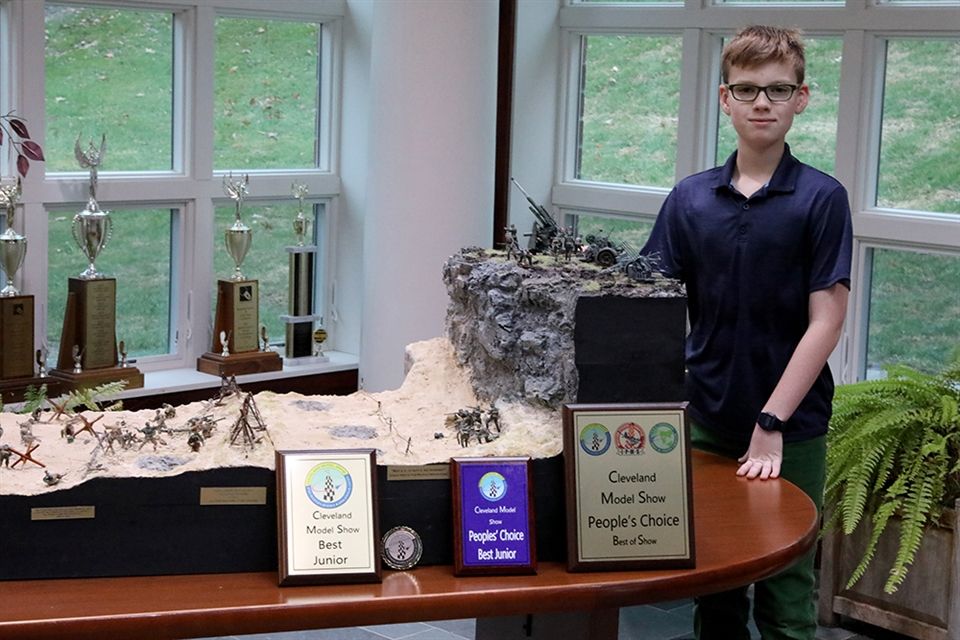 12/4/2019
Old Trail School student Julian Farian has always had an affinity for military history. One might even say, it’s in his blood.
With a family lineage that spans all the way back to the Revolutionary War, Julian recently discovered a way to creatively express his passion in the form of plastic modeling competitions. The sixth-grader also quickly discovered that despite his age – he’s 12 – and his relative inexperience – he built his first kit last Christmas – his skill and attention to detail is like nothing anyone in the modeling community has seen.
This was confirmed at the International Plastic Modelers’ Society (IPMS) competition in Kirtland in early November when Julian’s 6-foot long diorama depicting the invasion of Normandy broke a world record for most awards given, including Judge’s Choice Best of Show, People’s Choice Best of Show, Best of Show Juniors Division, and two others. He also became the first junior (a division for teens aged 12-17) to win the Best of Show award at any IPMS competition in the world.

His diorama, which is titled "Dog Green, Not Clear" in reference to a sector on Omaha Beach near the edge of Point Du Hoc, is currently on display in the Harrington McLaughlin Athletic Center near the swimming pool. Click here to see more photos.
In all, Julian spent a total of 534 hours creating the diorama, which he began building this past summer on June 6; the 75th anniversary of D-Day. His record-setting submission was one of 512 entries in a field dominated by adults, a majority of whom were well over 50 years old.
“Julian’s always been very curious and just wants to know everything,” said his mother Tiffany Washington Farian. “He loves learning about military history, engineering, and history of all kinds. He’s also very creative and extremely good with his fingers. This hobby includes everything he enjoys.”
Julian’s interest in modeling can be traced back to a summer program he took at Old Trail two summers ago called Aviation and Aviators. In the camp, he and other participants created airplane models within the context of learning about famous pilots and early aviation.
“He did the camp at Old Trail and thought it was great,” Tiffany said. “Then last Christmas, he asked for a model tank kit from Hobby Lobby that had 200 parts. Julian’s maternal great-grandfather – who is a direct descendant of George Washington’s brother, John Augustine Washington – was a Lt. Col. and tank commander in the Korean War. He quickly built the tank and wanted more of a challenge. The next tank he built had 1,800 pieces.”
A Spark Was Ignited
More and more trips to Hobby Lobby soon followed and everything snowballed from there. Julian quickly went from assembling models to building scenes, and then to constructing complete dioramas – a three-dimensional representation that tells a story.
“Julian didn’t really talk about his interest in creating models last year,” said Joanna Hollister, a Grade 5 teacher at OTS. “So we were blown away after learning that he had this super creative side and that he was so humble about it. His love of history was often reflected in his reading choices, however. His ability to recreate accurate moments in time reflects a tremendous ability to research; a rare skillset in one so young.”
As an 11 year old, he entered his first international competition last April and his diorama depicting the Battle of the Bulge earned a silver medal among 623 entries. He immediately drew the attention of much older competitors – some of whom couldn’t believe he had actually created the diorama independently.
To remove any doubt, he created his own YouTube channel to document each step of his next project – the record-setting diorama of the D-Day invasion. In his videos, viewers can see – step-by-step – the extent of Julian’s commitment to detail and historical accuracy. His dioramas are constructed using house insulation, resin, plaster, sanded grout, and wood. Additionally, nearly all the vehicles include after-market parts he adds or custom parts he creates himself to ensure that everything – including all paint colors – is accurate.

A Fully Engaged Learner
“Julian is someone who prioritizes his time extremely well – he gets up early on the weekends because he doesn’t want to waste any time,” Tiffany said. “He plays soccer six days a week and is just as passionate about playing the violin as he is about his hobby. He watches very little television and loves to read.”
Many of these qualities are evident at school as well. Carrie Brown, who teaches Grade 6 social studies at Old Trail, said that Julian’s organization, drive, and hard-working attitude all stand out in the classroom.
“Julian is engaged in learning, not just present,” Mrs. Brown said. “When he throws himself into a project, he makes sure to do the research and takes every assignment seriously. He asks thought-provoking questions that are sometimes difficult even for me to answer! He makes me want to be a better teacher.”
Not surprisingly, Julian has expressed a desire to become a military engineer when he grows up. And with his many interests, studiousness, and skills, the future is truly wide open. Until then, there’s always the next competition, which in this case will be in San Marcos, Texas, next July.