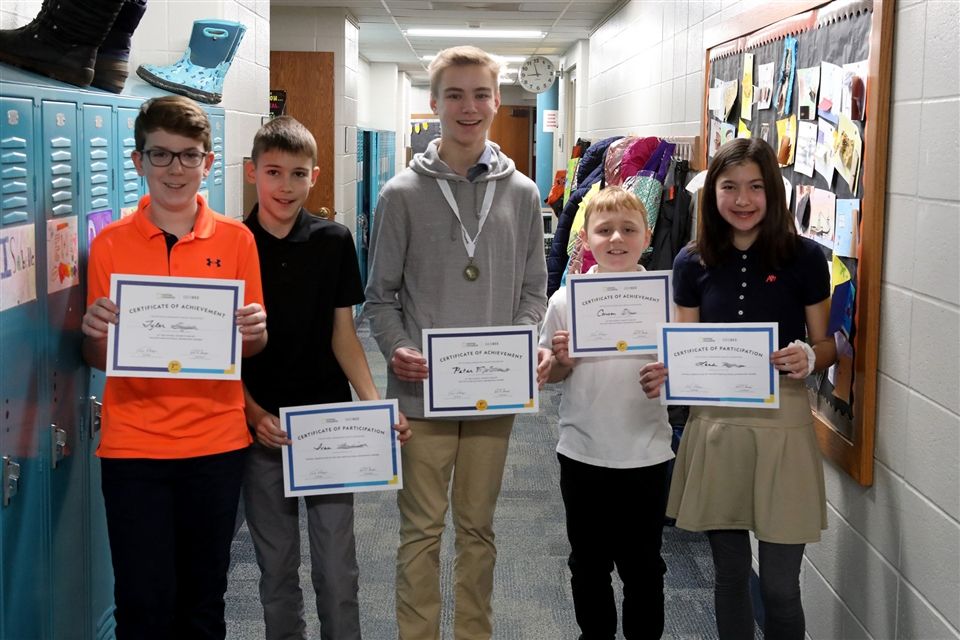 2/10/2020
We had the pleasure of recognizing our five finalists in the school competition for the 32nd annual National Geographic GeoBee at Community Assembly last week.
Among the finalists, Peter McGinnes '20 (pictured middle) was named Old Trail School's champion, with Tyler Snyder '21 (far left) and Carson Cooper '24 (second from right) placing second and third, respectively. Ivan Gradisar '22 (second from left) was the school's top finisher in Grade 6 and Leah Petras '23 (far right) was our top student in Grade 5.

The school competition is the first round of the annual National Geographic GeoBee, a geography competition designed to inspire and reward students' curiosity about the world. Questions cover not just geography, but also ancient and world civilizations, cultures, and physical features.

If Peter's qualifying test ranks in the top-100 of Ohio students, he will represent Old Trail at the state competition at the end of March. Qualifiers will be announced early next month. The winners of the State GeoBees receive an all-expenses-paid trip to participate in the GeoBee national championship this spring.

The National Geographic Society developed the GeoBee in 1989 in response to concern about the lack of geographic knowledge among young people in the United States. Over more than three decades, more than 120 million students have learned about the world through participation in the GeoBee. For more information, visit www.natgeobee.org.

Congratulations to all our school finalists and best of luck to Peter!