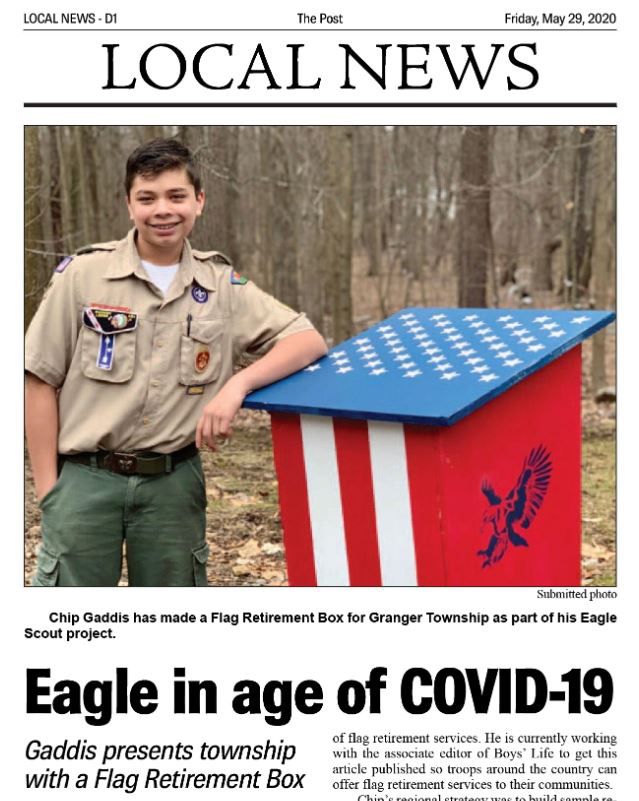 6/22/2020
Recent OTS graduate Chip Gaddis '20 made the news last month for a multifaceted Eagle Scout project that was fueled by the love of his country.
To honor the U.S. flag, Chip embarked on an eight-month journey that focused on creating and distributing handcrafted flag retirement boxes and DIY kits to boy scout troops across Northeast Ohio. There were obstacles along the way, including the statewide shutdown as a result of COVID 19, but Chip was determined to complete his project.

The following is an excerpt from an article that ran in the Eastern Medina Post on May 29:

Chip’s national strategy centered around writing an article for Boy’s Life, Boy Scouts national magazine. The article included directions on how to build your flag retirement box, how to prepare a flag for retirement properly, and a sample of a couple of flag retirement services. He is currently working with the associate editor of Boys’ Life to get this article published so troops around the country can offer flag retirement services to their communities.
Chip’s regional strategy was to build sample retirement boxes and kits to be distributed to troops in Great Trail Council (our local Boy Scout council). He first needed to raise funds. In the fall, Chip held a car wash, but the weather did not cooperate, and the car wash did not raise the funds he had anticipated. But not to be discouraged, Chip held a virtual car wash and was able to raise the additional funds.

The next step was to work with the local Home Depot to cut the plywood into the correct size (scouts cannot use power saws). Home Depot was very supportive and worked with Chip as he had several sheets of plywood cut to size. He first worked diligently and built a proof of concept box.

He used that sample box to encourage his troop to join him during his work session. Next, with his local troop, Troop 511, Chip held a work session where the scouts built four sample boxes and assembled several kits.
Chip then planned to present at the Scoutmasters Roundtables (meeting of adult leaders). Roundtables occur once a month on the same day across the council, so Chip needed help. He recruited scouts in teams of two to present to three different districts, simultaneously. He developed a script and scheduled the presentations. Everything was ready to go on March 12, 2020. Then COVID-19 hit. The Governor closed the State, and Scouts followed suit. With two hours to go, all the planning and coordinating for months came to a halt.
In April, with everything shut down, Chip prepared a video asking for Troops to join him in offering Flag Retirement Services to their community and to take a flag retirement box or kit that he would deliver. He posted the video on YouTube and sent a link to all the roundtable commissioners in an attempt to piggyback off of the “virtual” Roundtable. However, like many of our first “virtual” events in the COVID-19 era, things did not go as planned.
With the counsel of Chip’s scoutmaster, Mr. Turner, Chip reached out to the district executive to get the email addresses of the scoutmasters. Chip then prepared an email blast with the video embedded that he prepared in April and reached out to the scoutmasters of Chippewa (Medina), Moecomdws (Hudson/Stow), Signal Tree (Akron) and Lakes (Doylestown/Green/Barberton) districts. Chip was able to deliver over a dozen flag retirement boxes and kits to troops in our local council.
This past Tuesday, May 26th, Chip delivered a flag retirement box to the Granger township trustees completing an eight-month-long journey. Citizens of Granger Township can drop off retired flags at the Granger Fire Department. The flag retirement box can be found inside the main entrance of the Fire Department. Troop 511 will take care of retiring the flag appropriately and respectfully.

For context, Eagle Scout is the highest rank attainable in the Boy Scouts of America program. Since the program's inception in 1911, only four percent of Scouts have advanced to earn this rank. We commend Chip for this remarkable accomplishment and for the determination, passion and drive he displayed while completing this project.